SMART SECURITY'S TEAM ARE PROUDLY 70% VACCINATED AND COUNTING. WE ARE COMMITTED TO ENSURING EVERYONE'S SAFETY DURING THE PANDEMIC

How to Choose Between a Security Camera and a Surveillance Camera Home security has made significant improvements over the years and the same thing applies to security cameras. In this day and age of technological advancements, owning a home security system has become a staple in many households. The problem is that people are having a hard time choosing between a security camera and a surveillance camera. What are the differences between these two devices? And what are the pros and cons of each camera?

In this article, we’ll discuss the difference between a security camera and a surveillance camera so that you can make an informed decision.

What makes a security camera different from a surveillance camera?

Security cameras (also known as CCTV cameras) work by conveying signals from one area to another, usually, a monitor that’s situated at a distance. Surveillance cameras, on the other hand, operate on IP networks that link the camera from a remote area to the assigned viewing location. Security cameras are a popular choice for most homeowners because it combines modern features with excellent recording capabilities. When combined with other home security devices, you can significantly improve your home safety with a security camera.  Here are some pros and cons of using this device. 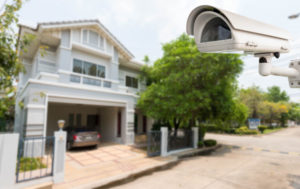